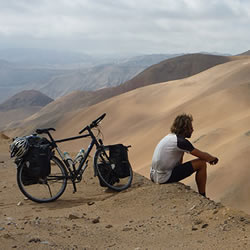 After forking out for a new part of the exhaust on the car today as well as it’s MOT being due I wasn’t in the best of moods this evening… however at the last minute I had been fortunate enough to get a ticket for a lecture given by Mark Beaumont at the Glasgow Royal Concert Hall.

For anyone who doesn’t know Mark Beaumont broke the 18,000 mile World Record for cycling around the world in 2007 / 2008 and at the start of this year completed cycling the length of the Rockies and he Andes from  Alaska, USA to Ushuaia, in southern Argentina, as well as climbing the highest peaks in North and South America.

Both expeditions have previously aired on BBC TV in the UK although it was certainly interesting to hear from Mark first hand of his experiences. His enthusiasm for his expeditions was clear and he had far more to talk about than could be fitted into the two hours (excluding an interval).

Though he is currently keeping tight lipped about his next project, which once again is going to be followed by the BBC, its unlikely that we will have to wait long to find out what it is.

Overall, it was a very enjoyable evening and if you enjoyed the TV series and get a chance to catch the lecture at any forthcoming venues then I would thoroughly recommend it.