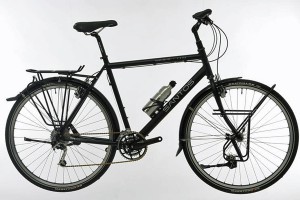 A couple of weeks ago I ordered a new bike, a Santos Travelmaster. There wasn’t anything wrong with the old bike really except that I was finding that after a days ride I was getting backache mainly caused because the handlebars just weren’t high enough and I found myself stretched out too far. Despite trying every possible solution I couldn’t get it to work for me. As well as that I had also been considering lowering the gears. I had been thinking about it for a while and  in the end I decided that purchasing a new bike was the best solution.

My main criteria for the bike, apart from a more upright riding position, was that it should be a dedicated touring bike. Something that could do the miles over any sort of terrain. If I’m honest I did have another criteria which was that it should have a Rohloff hub – for those who have no idea what what that is basically it is a sealed gearing system built into the hub of the rear wheel rather than a standard derailleur system. Unfortunately funds could not stretch the extra £1000 required to purchase one.

Santos bikes are custom made and you can get to choose the specification that suits you. It can take a few weeks for your bike to be put together this way but you then get a tailor made bike. Santos also have two bikes in their Travelmaster Special range available from stock with predetermined components. I was more than happy with the specs offered by the Specials… okay there was no Rohloff hub but then again I would prefer to eat for the next couple of months… and settled  of these.

Of course there is one problem with the Santos and their bikes, the company is based in the Netherlands. I tracked down three dealers in the UK, there may be more but I only found three. A couple were offering bikes in their sales and I did contact all three in the end with various questions which to be fair they all answered. I also contacted a number of people who had purchased Santos Travelmasters – a number of those have been or are in the process of cycling around the world – and asked their opinions. In the end I settled on a company named JD Cycles who are based in West Yorkshire. There were a number of reasons why I chose them in the end. First and foremost they can arrange for your bike to be delivered anywhere in the UK… in fact according to their website they will deliver products internationally but you better check with them first before ordering a bike. Living in Scotland I wasn’t interested in travelling over 400 or so miles to either of the other two ships who would only deliver locally. Secondly, I had found Jamie , who had answered my queries , from JD Cycles to be very helpful and he would always return my calls or emails. The final reason was that they were also recommended to me by a couple of other cyclists including Michael and Jon, who are currently cycling  from the UK to Hong Kong.

It took just under two weeks from the time I placed the order until the bike was delivered first thing this morning. In fact JD Cycles had phoned me yesterday to say that it had arrived and they had it setup, repackaged and sent to me by TNT for today. That’s pretty good service if you ask me.

So how does it ride? Well I took it out this afternoon for a 15 mile ride and put it through its paces. It was excellent. I had ordered a 21″ aluminium frame with 26″ wheels. I’m 6’1″ tall (without shoes on) and had been concerned about the sizing but the bike was a perfect fit.  If I have one complaint its that I had intended to swap the Terry Liberator saddle over for my Brooks leather saddle. Unfortunately the mount on the  seat post that comes with the bike does not fit the rails on the Brooks saddle (despite the fact that I was able to put the Terry Saddle on the seat post that the Brooks saddle had been on. Before any suggests why don’t I simply swap the seat posts over then, I did think of that but the posts are of different circumferences.) Therefore, for the time being, I will give the Terry Liberator saddle a try and see how I get on with it though I don’t think it will be long before I’m missing the Brooks saddle!

Now… I’ve always fancied visiting John O’ Groats… wonder how far it is from my house to cycle!!!