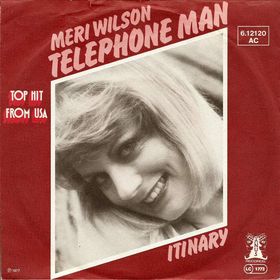 Okay, blame this one on my brother who was reminiscing a moment from his childhood… if you are old enough think back to the late seventies…. 1977 to be precise.

A young woman by the name of Meri Wilson recorded a song with BNA Records titled Telephone Man. It was the story of a woman and her amorous adventures with her AT&T technician, filled with suggestive lyrics and her breathy squealing voice. The song spent ten weeks in the UK Singles chart and became a surprise hit single, reaching number 6. (Lyrics are included at bottom of the page)

Twenty years later when Wilson updated the song when she released the Internet Man.

Sadly Wilson died in 2002, at the age of 53, after she lost control of her car on Georgia State Route 377 in Americus, Georgia, during an ice storm.