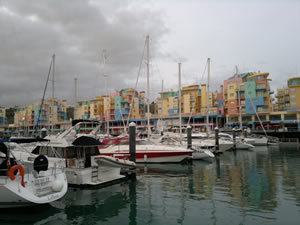 It was a day for wandering around Albufeira and seeing if much had changed since my last visit earlier in the year.

Around lunchtime I found myself down at the marina just outside of the old town. It’s a peculiar place in that it is almost secluded from the main tourist areas of Albufeira and the multicoloured apartment buildings that look down over boats take a little getting used to.

I decided to have a bite to eat and took a seat at one of the restaurants along the front of the marina. As I listened to the conversations around me I realised that many of the other diners were, if not already taking a cruise trip along the coast, being convinced by one woman in particular – who I later discovered multi-tasked between a variety of roles including: waitress, ticket sales, cruise guide and translator –  to sign up for a cruise that afternoon.

I had fancied the idea of taking a cruise along the coast but hadn’t really looked into it too much so after paying the bill for my lunch I enquired. As luck would have it the afternoon cruise was due to leave 15 minutes later so I signed up and paid my €18.

Therefore the afternoon was spent sailing – I suppose you can only do that if you have a sail – cruising on the catamaran Belize from Albufeira Marina and in a westerly direction along the coast with the waitress / ticket sales / cruise guide / translator woman advising us on all the various features, caves, celebrity houses and towns that dotted the coastline.

To quote the leaflet for the cruise:

Experience an Algarve where nature has sculpted out of the rocky formations a true natural art gallery, an ocean full of life and mystery reserves.

Come to know the heart of the Algarve, live and feel the embrace of natured bathed in unequalled blue. Cruising, while visiting ne of the various beauties of the Alagarve from the sea will be an unforgettable and unique experience.

A 2 hour cruise, departure from the Marina of Albufeira in a westerly direction along the coastline, where you will be able to observe the beauty of the ragged coastline, made up of cliffs and caves.

It was only when we were returning back to the marina when the pilot spotted a shoal of dolphins and guided the catamaran after them.

It quickly became a game as the dolphins swam beneath, in front and alongside the catamaran. I tried to take photos unfortunately ones response time from the moment a dolphin appeared out of the water to the time it dived back beneath the waves was often very short. Maybe next time I’ll remember I have a video facility on my phone.

By the time we returned back to the Marina the weather had cooled and I was feeling a little chilly dressed in shorts and T-shirt. I politely declined the invitation of tea and cake for only €1 back at the restaurant where I’d stopped for lunch and quickly headed back in the direction of town and the apartment.